Early Mammograms and Genetic Testing for the Win 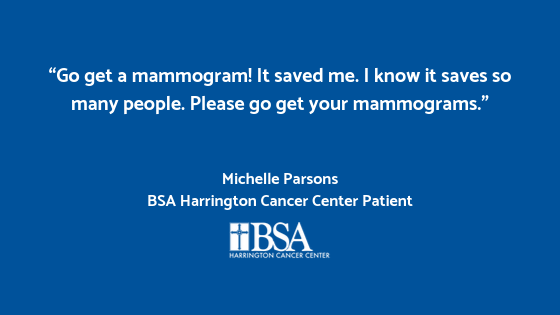 Mammograms become routine beginning at age 40 for most women, but Michelle Parsons of Amarillo had a good reason to start sooner.

“I'm adopted so I didn't know a lot about my family history,” shared Parsons. “At the age of 38, I requested a baseline mammogram.”

Michelle said a family friend’s breast cancer diagnosis made her eager to get a fuller picture of her health. Especially since her lack of family history meant she wasn’t sure if she was at an increased risk. Having one first-degree female relative (sister, mother, or daughter) diagnosed with breast cancer doubles your risk. With two first-degree relatives diagnosed, your risk is five times higher.

On May 7, Parsons went to BSA Harrington Breast Center, as she did every year, to get her mammogram.

The next day, Parsons received a call, notifying her there was a slight change in the image from the previous year.

“I went back on May 23 and did another set of pictures, an ultrasound plus a needle biopsy,” Parsons says. “They told me it was very small, but the slight change shown in the mammogram was Stage 1 Invasive Ductal Carcinoma. Very scary to say the least.”

Parsons’s tumor was caught at a very early stage. This meant she needed surgery followed by radiation. Before any of that began, Parsons wanted to know more about her health and how it could possibly affect her two daughters. She had genetic testing performed a week after getting her diagnosis.

“Everything was negative. I don’t carry any bad genes, so hopefully I haven’t passed anything on to my kids,” says Parsons. “That was another big concern for me.”

Next up was surgery. To give Parsons the greatest chance of success, her surgeon recommended a therapeutic breast reduction. Having that surgery performed at the same time would mean the tumor removal could have larger margins, leading to less radiation time.

In mid-July Parsons underwent both surgeries.

“Vietta is my nurse navigator and she’s been great,” Parsons said. “If I have questions any time I text her and she texts me right back.”

“Everybody has been really helpful, informative and very understanding,” says Parsons. “They see this every single day and they help you out. The girl at the front recognizes me, hands me my badge and I go back.”

In addition to a supportive family, Parsons says the key to getting through a cancer diagnosis and the following treatments is a mental game.

“If you stay positive, that's 90% of the battle” shares Parsons. “I've never been scared. I was very initially, but then I was like "you know what - this is no big deal. I'm going to beat this and it's going to be fine.""

Her last piece of advice is to get a mammogram.

“Go get a mammogram! It saved me. I know it saves so many people,” says Parsons. “It's not that big a deal. Please go get your mammograms.”

Grandmother of Seven's Positive Attitude Can't Be Beat by Cancer