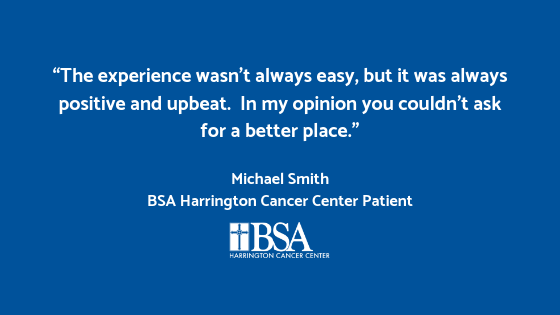 In the United States, one in every 22 men will be diagnosed with colorectal cancer. After a routine colonoscopy ordered by his primary care physician, Michael Smith, 56, discovered that he was the one in 22.

“My primary care doctor knew I was anemic and set up a colonoscopy at BSA,” Smith shared.

Following his colonoscopy, Smith received the news that he had a cancerous, 5-inch tumor in his rectum that was growing through his rectal wall. Smith was diagnosed with Stage 3 rectal cancer.

“It was a shock,” Smith explained. “I knew it would be unchartered waters for my family and me.”

Smith was quickly referred to BSA Harrington Cancer Center, where his doctors formed an aggressive treatment plan. Smith would simultaneously receive both chemotherapy and radiation treatments in hopes of shrinking the tumor.

During the course of his treatments, Smith felt very connected to the staff at BSA Harrington Cancer Center.

“I developed a personal relationship with my doctors, nurses and techs,” Smith shared. “The experience wasn’t always easy, but it was always positive and upbeat. In my opinion you couldn’t ask for a better place.”

“I felt confident about it,” Smith said. “The experience was really good and the surgery was a success.”

“This was my first major surgery and first time really at BSA, and it was pretty dang good,” Smith explained. “The nurses were very attentive and the staff was so professional.”

Smith and his family were pleased to learn that the lymph nodes removed during his surgery came back negative for cancer. Smith is in the midst of his second round of chemotherapy and will finish treatments on October 29, 2019.

“We have been blessed with good physicians,” Smith shared. “I would absolutely recommend people to seek care at BSA and BSA Harrington Cancer Center.”

Lung Cancer Survivor is Thankful to be Cancer-Free