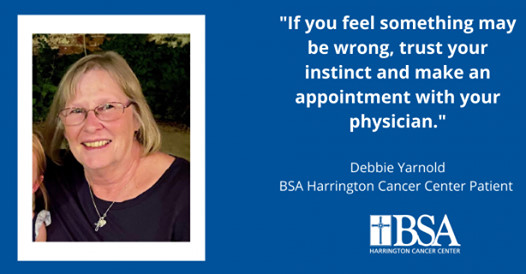 Nearly five years ago, Debbie Yarnold, noticed a faint trace of blood after using the restroom. Being postmenopausal, this caused concern and prompted Yarnold to make an appointment with her gynecologist. After several exams, Yarnold was diagnosed with stage 1B ovarian cancer.

“At first, I was told that when women age, they experience dryness which could result in bleeding,” said Yarnold. “I was given an estrogen cream to use, but when the spotting didn’t get better, I came back in for a CA-125 blood test.”

Yarnold’s results did not prompt immediate concern, but her physician decided to investigate further.

“My number from the blood test came back at 19, which seemed fine, as 30 or less does not raise concern for cancer,” said Yarnold. “But when my pap test came back as unclear, I had an ultrasound and was told that one of my ovaries looked troublesome.”

Through her physician’s guidance, Yarnold made the decision to have her ovaries removed, which resulted in finding out that both ovaries had signs of cancer.

“At that point, my gynecologist referred me to BSA Harrington Cancer Center,” said Yarnold. “I had a consultation with an oncologist and was scheduled for a hysterectomy, plus a process called debulking, which would allow my doctor to remove cancerous tissue if present in other areas of my body.”

For Yarnold, the good news was the cancer had not spread but had contained itself in her ovaries.

“I’m very lucky to have caught this early,” said Yarnold. “Most women with ovarian cancer do not catch it until it’s in its late stages.”

Following her hysterectomy, Yarnold underwent six months of chemotherapy at BSA Harrington Cancer Center. During that time, she met many women at different stages of the same cancer.

“Most of the women I met through chemotherapy were in their 50’s and 60’s, but one woman I met was in her early 80’s when she got ovarian cancer,” said Yarnold.

“At BSA Harrington Cancer Center, everyone was so compassionate, which helps a lot when you’re scared,” said Yarnold. “On my first day, a nurse stayed with me for a long time to make sure everything would be ok. I was made to feel very comfortable, and it was like that every time. Everyone there was just really good.”

On Yarnold’s last day of chemotherapy, she received an added surprise.

“I was so excited to be finished and so was the staff,” said Yarnold. “Everyone was singing and clapping for me, which was nice. They gave me a certificate, a yellow rose and I got to ring a bell which marked my end of treatment.”

Now, going into her fourth year without cancer, Yarnold has advice for other women.

“If you feel something may be wrong, even if it’s the slightest symptom, trust your instinct, and make an appointment with your physician,” said Yarnold. “Don’t put it off or wait too long because it could mean the difference between stage 1 and stage 4.”